Tendinitis? Nope, you probably have tendinopathy.

The label tendinitis is being replaced by tendinopathy for tendon disorders in humans. Tendon disorders manifest degenerative changes, with attempts by the body to repair the damage, as opposed to the signs of inflammation.

Over the last decade, there has been a change in the nomenclature for tendon problems. In the past, the term tendinitis was used. This implied that the pain associated with tendon disorders was based on regional inflammation in and around the tendon. Researchers have demonstrated that inflammation actually plays a fairly small part in the cause of tendon disorders. Most tendon disorders represent a degenerative phenomenon, known as tendinopathy or tendinosis. These words imply structural damage as opposed to inflammation. The most common areas of tendinopathy include the patellar tendon, the Achilles tendon, the rotator cuff tendon and the lateral epicondylar tendons, often involved in tennis and golfer’s elbow.

Below you can see the typical thickening of achilles tendinopathy.

Tendon problems are like economic problems; they involve a supply/demand mismatch. People give their tendons more load than they are able to bear. As opposed to macro-failure where the tendon tears, the tendon develops small areas of degeneration. The body attempts to repair the area of degeneration by building a new blood vessel scaffold. The blood vessel scaffold then lays down new collagen to repair the damage to the tendon. This repair job is somewhat disorganized compared to a normal tendon which is very linear. There is very little blood supply around most tendons and there are very few cells present. In tendinopathy, there is a prevalence of fibroblast cells which produce collagen. There are also new blood vessels which have nerves in their walls. It is believed that some of the pain associated with tendinopathy comes from these nerves.

Older treatments for tendinitis were ice, anti-inflammatory medicines and cortisone injections. These often were not very helpful for patients with tendon degeneration. Newer treatments require the clinician to try to minimize abnormal loading through the tendon and maximize functional loading through the tendon. This often will require changes to alignment, equipment or technique. An example would be the use of orthotics for tendinopathy in the foot or ankle. These can change the patterns of biomechanical loading through the tendon. Active stretching of muscle-tendon units can help make tendon disorders feel better. Realizing that tendon disorders are often a result of muscle imbalance can help to point the sufferer to remedial exercises that address the root causes of the disorder.

One of the cornerstones of tendinopathy treatment is the application of load through the tendon through eccentric exercises. Eccentric exercises are where a muscle is activated, but the muscle- tendon unit actually lengthens. This puts a substantial amount of tension through the muscle tendon unit. This helps the body to maximize the strength of the tendon, increasing its functional capability. It also tends to be associated with decreased pain and improved performance. One of the things we often talk about in the clinic is ways to provide eccentric load through the tendon disorder that you suffer. One of the simplest examples would be a slow descent of the foot while standing on a stair, such that the Achilles tendon stretches while it is active, providing eccentric load to the Achilles unit in people with Achilles tendinopathy.

Studies have shown that the progressive application of concentric to eccentric load with disorders like Achilles tendinopathy is associated with resolution of the functional impairment and pain. Areas of tendinopathy will frequently persist and can be palpable, but not painful.

One of the most important treatments for tendinopathy is the progressive application of eccentric exercise. 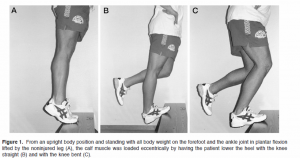