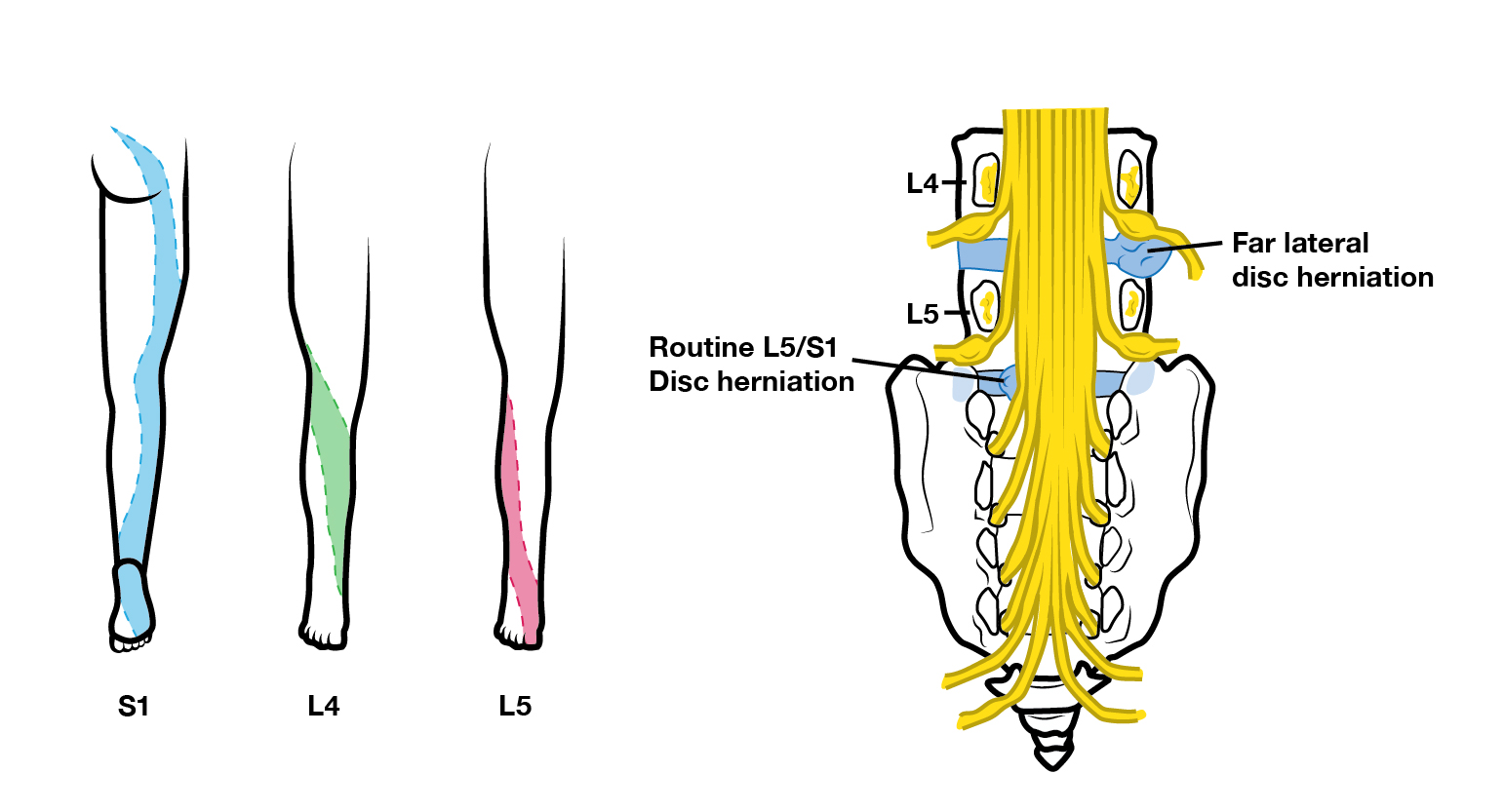 Radiculopathy is a very common problem which usually is caused by age related changes to the inter-vertebral disc.

Acute radiculopathy is one of the most painful experiences humans face….

Radiculopathy is a medical word for an angry nerve in your body. Radiculopathy usually emanates from either the cervical or lumbar spine. Most of the nerve root difficulties are due to abnormalities in the intervertebral disc in either the neck or the lower back. Lumbar radiculopathy is often referred to as sciatica, as this is the most common nerve irritated by acute disc herniations. In general, the pain of radiculopathy goes down a very circumscribed path of the leg, referred to as a dermatome. Similar manifestations will occur down a patch of skin in the upper extremity. Clinicians can determine which area of your neck or back is affected by a disc herniation based on your description of the radiation of pain, as well as clinical findings of diminished reflexes or weakness in certain muscles called myotomes. The area of pain referral, area of weakness, area of sensory loss and area of muscular weakness is referred to as the report card of radiculopathy.

I often use the analogy of a jelly donut when referring to the structure of an intervertebral disc. The intervertebral disc has a tough outer coating called the annulus fibrosis. There is an inner area called the nucleus pulposus. Most of the nucleus of the jelly donut consists of fluid and contains some very provocative chemicals called prostaglandins. As we age, the outer part of the disc or the crust of the jelly donut starts to wear and develops cracks. Unfortunately, these cracks can develop even in late adolescence. As fluid is allowed to leak out of the jelly donut, it can come into contact or inflame regional nerve roots. This can begin the very painful experience of lumbar radiculopathy.

Most often, one nerve root will be affected on one side of the body. These are very painful experiences and generally cause the patient to attend their health care practitioner for care. The onset of radiculopathy is generally related to the age of the patient, with a prevalence in the thirties for lumbar radiculopathy and the 40’s for cervical radiculopathies. There is less radiculopathy in younger and older patient populations. Most people do not have a major incident that causes the radiculoapthy. Common stories are that the patient simply bent forward to tie up their shoe or pick up a pen. This is literally a straw that broke the camel’s back scenario, where a small amount of lumbar disc loading experienced while bending forward can damage a vulnerable, aging disc. 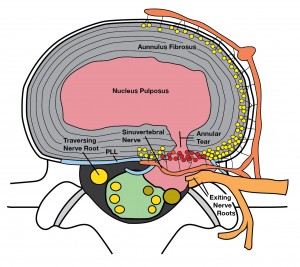 Despite the fact that the pain can be very severe initially, the prognosis is favorable. In general, the body attacks the fluid that has leaked out of a damaged disc and removes it from the site of compression of the nerve root. This process can take several months however, and care is often required during that recovery.

In general, your clinician is required to rule out other sinister features which may cause nerve root compression such as tumor, infection or a fracture. These so-called red flag conditions are rare.  Less than 1 in 100 episodes of radiculopathy are caused by these sinister features. Complaints such as weight loss, fevers, chills, night sweats and a previous history of cancer raise concern that the radiculopathy may be caused by something other than disc aging.

Advanced imaging such as MRI and CT scan is not usually required for initial management. As long as only one nerve root in involved, and there is no progression of difficulty such as progressive weakness or progressive areas of sensory change, then primary care management is acceptable. Often, clinicians will use medications to treat your pain. Anti-inflammatory medicines have evidence to support that they are effective and are generally safe in most people. The prostaglandins in the nucleus pulposus are profoundly inflammatory and this provides the rationale for use of anti-inflammatory medications. Often, the surrounding spinal musculature becomes very irritated and develops too much tension. Seeing a manual therapist to help relieve this tension is often helpful in the recovery from radiculopathy. Assuming simple positions thought to decrease disc pressure known as the McKenzie positions are often helpful in the short term.

The discs of our neck and our back are particularly prone to wear and tear based on some of the postural challenges we have with our occupations and life in general, and remedial exercises will often be given to help prevent a recurrence of a radiculopathy. Exercises such as the supine bridge, the prone plank and the side plank can activate spinal muscles in a safe an effective manner. Learning how to activate your abdominal muscles in a way known as “bracing” is something to review with us in the clinic. Other easier exercises such as the cat and camel, or the cross-crawl positions can work the back muscles in a safe manner.

If your problems last longer than one month or progresses, advanced imaging is often undertaken and the MRI is the investigation of choice. You should know that the MRI primarily reveals age related changes in the spine, and unless a tumor, infection or some other unusual condition is found, most patients will be treated conservatively. Don’t fret if you have degenerative changes on your MRI, as they are normal, and will be present in most of your age related peers who have no back pain.

Surgery is typically only indicated if you have progressive neurologic loss or a condition known as myelopathy where there is pressure on spinal cord structures, as opposed to peripheral nerve structures. In general, your examination will help determine whether you have any evidence of myelopathy. This is typically rare. The good news is that the natural history of radiculopathy is favorable. Within six months, 50% of patients will notice resolution of their neurologic symptoms and their pain. 90% of people typically have recovered within 12 months. These are long timeframes but help to put the condition in its appropriate perspective

Fortunately, acute radiculopathy has a good prognosis and responds to conservative measures most of the time….


Progressive loss of strength, or spreading to the other side of the body are red flags and should prompt urgent assessment.