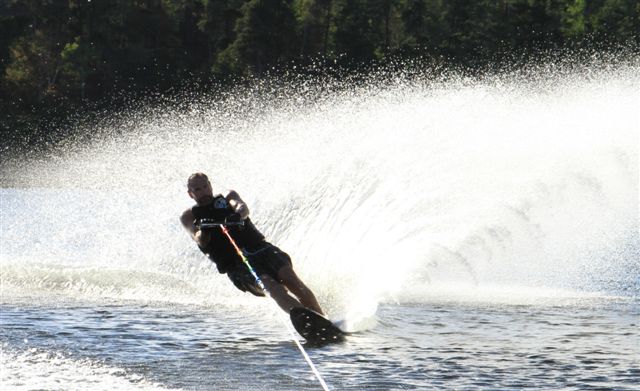 The diagnosis of concussion has become associated with fear and anxiety. The medical evidence indicates that this does not need to be the case.

Concussion is one of the most rapidly changing areas in all of medicine…..

Concussion is one of the most rapidly changing conditions in medicine. When I first graduated from medical school in 1984, concussion was considered a diagnosis of exclusion that had no physical findings and no significant consequences. People were allowed to return to the same game in which they were concussed. Obviously, things have changed dramatically.

Concussion comes from the Latin word concutere, which means to shake. Concussion is caused by violent shaking of the head, which is referred to as rapid linear acceleration. An individual does not have to be rendered unconscious to be diagnosed with a concussion. Although this used to be one of the key diagnostic criteria, it has been demonstrated that individuals can be concussed without losing consciousness.

To diagnose a concussion, health care practitioners rely on the report of symptoms from patients who have been injured.  There are many problems associated with this.  There are 22 separate symptoms which are considered to be consistent with a diagnosis of concussion. An individual can have one or all of these symptoms. Because these symptoms are non-specific, there is sometimes confusion as to whether an individual has sustained a concussion. For example, irritability and headache are both concussion symptoms and these symptoms can obviously be present without having sustained a concussion. Well people have concussion symptoms, virtually all the time.  Complicating matters further, we know that athletes often will not report symptoms that may be due to a concussion.  This has prompted the search for more objective measures of impairment after concussion.  Tests such as the computerized ImPACT inventory and the King Devick oculomotor screen are useful in this regard. ImPACT testing has shown us that injured athletes can have impairment in their neurocognitive function, and feel fine.

There is a substantial overlap between concussion and whiplash as these conditions share the same mechanism of injury and most of the same symptoms.  The small joints of the neck refer pain to the areas shaded in this diagram. 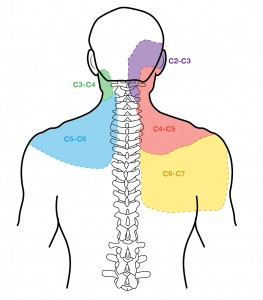 Individuals who are suspected of having a concussion need to be removed from the field of play if they are involved in sport. In general, they should be assessed by a duly qualified health care practitioner who has experience dealing with concussion. If any concern exists about an unstable neck injury or other significant neurological insult, the patient should probably be evaluated in an emergency setting.

There are excellent templates to help guide evaluation of concussion and one of the most commonly used forms is the SCAT 3. This provides a roadmap to evaluate a patient’s symptoms and some of the key physical findings that are associated with this syndrome. It allows follow-up for patients in the days to weeks after a concussion, and provides some objective measure of the patient’s symptoms and function.

In general, the most important component in managing a concussion is to avoid any further injury during the acute phase. The acronym “NSYS” no to sport and yes to school is a message that I often share with young patients and their families. Two recent research papers have indicated that people who are strictly rested after a concussion, actually report more symptoms and have a prolonged recovery compared to those who are allowed some type of activity that is safe. It has also been demonstrated that reassurance is one of the most important things to help patients along their recovery. The reassurance that can be provided centers around data which indicates that a very high percentage of patients, something close to 90%, will have a resolution of their concussion symptoms and impairment within 7 to 10 days. This has been based on studies of thousands of players in U.S. college football.

There is also evidence that treating the neck and the vestibular system of patients who have been concussed can expedite their return to usual activity. In general, medications are not used to treat patients with concussion.

The media has been stoking fears about the long-term manifestations of concussion but, at this time in the evolution of medical science, concussion should be considered a condition with a favorable prognosis. With appropriate reassurance and primary care, most people can return to usual function within a matter of days.

The 7 R’s of concussion management are:

Reassurance about the good prognosis.
Refrain from risky sport and work.
Reduce symptom producing activities.
Return to school and work as soon as possible.
Re-activate through safe exercise below the level of symptoms.
Refer for treatment of neck and vestibular system.
Recycle ideas regarding multi-disciplinary care used in those with delayed recovery.