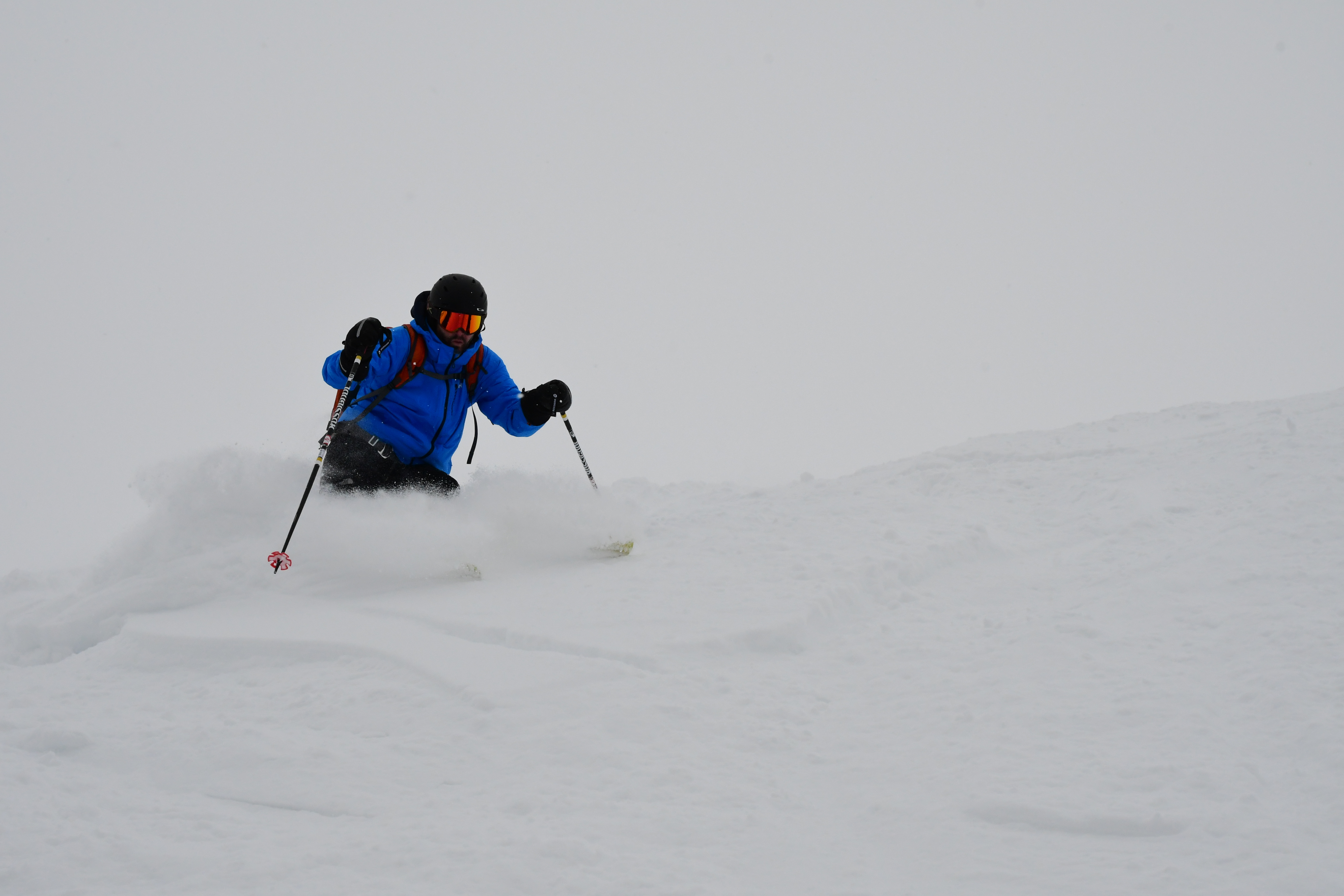 The ACL Is a critical stabilizer of the knee joint.

The anterior cruciate ligament or ACL is a commonly injured structure in the knee joint of athletes. The usual mechanism of injury to this ligament is when an individual plants their foot and cuts or decelerates quickly. It is surprising how much damage to the knee joint can develop after such an innocent mechanism. The knee drops towards the midline of the body in a position known as dynamic valgus. This dynamic valgus can be associated with intense rotation of the knee. This intense rotation of the knee associated with valgus leads to damage to the ACL. 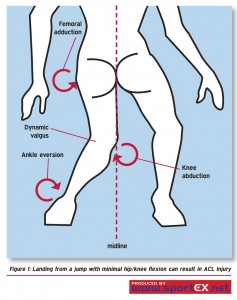 The ACL is a structure that runs from the back of the thigh bone or femur to the front of the shin bone or tibia. Its main function is to provide rotational stability to the knee joint. The knee joint is inherently unstable when an individual is standing and the ACL normally does an exceptional job of stabilizing the knee joint through dynamic loads. As the main structure responsibility for stabilizing the knee, it has been said that the ACL guards the menisci, and the menisci guard the rest of the knee joint. The menisci are the donut-shaped cartilages that sit on top of the tibia providing stability to the joint, shock absorption and lubrication. The ACL is an amazing structure with nerves that sense the body’s movement, known as proprioceptors embedded in it. These proprioceptors give feedback to the brain helping to conduct the orchestra of muscles that surround the knee joint, augmenting its stability and allowing it to perform very well under numerous, unstable, loaded conditions. 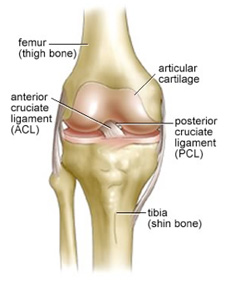 The classic triad of complaints in an individual who has torn their ACL includes a pop experienced when the knee pivots, an inability to continue activities after the injury and rapid swelling within the knee. In this scenario, the ACL is the injured structure 90 % of the time. This rapid swelling is usually caused by blood in the joint, called a hemarthrosis. Most individuals are quite impaired after tearing their ACL, but the injury can be more subtle than that and an individual may simply think they have had a minor sprain.

When you injure your anterior cruciate ligament, typically your physician will order x-rays to make sure there has been no bony fracture to account for the problem in the knee. The clinician can normally determine that you have torn your anterior cruciate ligament by performing a test on the joint called the Lachman test. The Lachman test is virtually 100% accurate in determining whether a person has torn their ACL as long as the clinician has adequate experience. In general, both the clinician and the patient can feel a firm “thunk” know as a hard end feel, when an examiner moves the tibia anteriorly on the femur and the ACL is stressed. In a case where the ACL has been torn, the end feel becomes very soft and there is often a very distinct side to side difference in the amount of movement of the tibia on the femur.

ACL injuries are often accompanied by cartilage damage in the knee, in particular to the meniscus. In the usual case where an individual has a dynamic valgus mechanism of injury, the lateral meniscus is damaged. There can also be bone bruising in this lateral compartment of the knee joint. Bone bruising demonstrates the intense loading taking place in the joint with the pivot shift mechanism of injury, but don’t tend to cause much long term damage. Because valgus loading also places stress on the medial collateral ligament, this ligament is sometimes injured. In general, damage to the medial collateral ligament is not associated with long term difficulty in the knee. Damage to the meniscus can be associated with long term difficulty. Patients often ask whether their ACL has been completely or partially torn. Usually the tear is complete, but even in partial tears, the knee may not function in a stable fashion, and the knee is described as being ACL deficient.

Short term management of the individual with an ACL tear generally involves bracing for comfort, although nothing is really required. Unfortunately, the anterior cruciate ligament does not really heal when it has been damaged. An analogy we can often tell patients is that when you feel the pop, it is like a balloon popping, and that balloon will not be the same again. Individuals should try to get the knee moving and keep the swelling down by the application of ice or other therapeutic modalities. In general, light weightbearing is acceptable. Most surgeons who evaluate patients with ACL tears prefer to have an MRI to evaluate the structures inside the knee. This can help with surgical planning.

Not all patients who tear their ACL will do poorly in the future, but the telltale sign of a bad prognosis is when an individual’s knee feels unstable and keeps buckling. These buckling episodes involve rotation and shifting of the bones in the knee and this can cause further damage to the cartilage. Unfortunately, many people with ACL tears will develop arthritis in their knee within ten years after the accident. Surgeries are available to reconstruct the anterior cruciate ligament. They are substantial surgeries that require holes to be drilled through the tibia and the femur, and the harvesting of a tendon – either the patellar tendon or the hamstring tendon from the semitendinosus. These tendons are then threaded through the drill holes through the shin and thigh bones to reproduce the mechanical features of the anterior cruciate ligament. In general, there is a one month period of significant impairment after the surgeries and then an athlete can begin aggressive rehabilitation programming for strength, balance and functional training.

Most clinicians say that an athlete should not return to sport until they are functionally able to do so, and this normally is at about the six month mark after surgery. Bracing can be done to augment stability and these derotational braces are often used by athletes in a return to sport.

There is an old saying that we should not fix the knee so a person can wreck it, and this indicates that if we return to intense pivoting sport after ACL tears, we do put our knee joint at risk of a subsequent tear and further damage to the cartilage and eventual arthritis. Some studies have shown that up to 80% of all people develop arthritis in their knee within ten years of the index injury. If an athlete can move into a less demanding sport, their knee will probably have better health in the future. In general, when a person tears their anterior cruciate ligament, they are usually out of their favorite sport for about 12 months in our health care system.

Hopefully, this helps your understanding of your anterior cruciate ligament injury and its importance to the knee. You should also be aware that there are exercises that can decrease the incidence of anterior cruciate ligament tears in the knee. A great example of this is available online in the FIFA 11. These neuromuscular training exercises help increase the strength of the hip abductors, quadriceps, and hamstrings and help us with our proprioceptive ability. These can decrease the chance of the knee dropping into dynamic valgus during sport. Please the FIFA 11 website. The hip abductors are particularly important in preventing ACL injuries. Weakness in this muscle group, particularly in young females, allows dynamic valgus to take place, and increases the risk to the ACL.

“Don’t fix the knee so you can wreck it”

The classic triad of ACL injuries is a pop felt with pivoting or cutting, an inability to continue activity, and rapid swelling in the knee joint.