The use of orthotics for controlling foot postures is somewhat controversial. Recent fads such as barefoot running and minimalist shoes have challenged some long term beliefs regarding this whole industry.

The word “orthotic” means to straighten and the general premise is that orthotics can straighten out our feet. The science underlying orthotics has developed far beyond straightening out crooked feet.

To understand how orthotics might help people with problems in the lower extremity, it is worthwhile to review foot morphology. The foot is typically manifests one of two broad categories of alignment. There is a cavus foot which has a high longitudinal arch and is typically considered to represent a rigid foot. Cavus feet are generally associated with the foot and ankle motion referred to as supination. This type of foot does not move much when it interfaces with the ground during the stance phase of gait. It does not dissipate load well and therefore, is not a good shock absorber. This type of foot transmits a great deal of force up the leg because of inability to adapt to surfaces.

The other extreme of foot morphology is the flat foot. Medically, this is referred to as a planovalgus or pronated foot. In military conflicts of history, individuals were prohibited from fighting if they had flat feet. We now know that many exceptionally gifted athletes have flat feet, and this does not have to be an impediment to function.

The flat foot is a mobile foot and accommodates well to the ground upon interface during the stance phase of gait. This helps to dissipate load. The unfortunate thing is that the planovalgus foot transfers motion up the kinetic chain to the shin, knee and hip. For example, the shin bone or tibia will rotate internally as the planovalgus foot drops into a pronated position. This internal tibial rotation can affect the knee joint. It can also affect the hip contributing to the position of dynamic valgus. Other sections of this website deal with the problem of dynamic valgus.

So, in general, we have a supinated foot, which is considered stiff and transmits load up the extremity or we have the flat or pronated foot, which moves a lot and transmits motion up the extremity. In broad terms, orthotics to deal with these issues would involve a soft, shock absorbing orthotic for the stiff or cavus foot and a more rigid or motion limiting orthotic in the pronated or planovalgus foot.

The prescription of orthotics first became fashionable in the late seventies and early eighties when the marathon boom first began. People were developing a lot of lower extremity overuse problems. Footwear was just developing additional devices to deal with different foot types. Studies at that time demonstrated that rigid orthotics did have a value in decreasing overuse injuries of the lower extremity of marathon runners, particularly in flatfooted individuals.

The prescription of orthotics is much like the prescription of glasses. You need to have a determination of the underlying problem to have a successful prescription. A thoughtful clinical analysis is usually sufficient, but some practitioners use computerized load platforms to determine the individuals requirements.

One of my complaints with many orthotic devices is that they are only two-thirds in length and stop just behind the metatarsals. These orthotics are often rigid and limit motion in the midfoot and rear foot. Then, at the forefoot, there is a dramatic change where there is no support. A lot of motion and load can be delivered to this part of the foot. I have seen this contribute to the development of problems at the metatarsal-phalangeal region, especially the 1st metatarsal phalangeal joint. The transverse metatarsal arch is also negatively effected by this type of orthotic and can irritate problems in this region.

To accommodate for this difficulty, an orthotist colleague and I have developed a type of orthotic that is made out of cork material. It provides a more gradual interface from the rear foot to the forefoot. The cork material does not provide too much rigidity in the rear foot, but also provides more support in the forefoot. We can also often add a metatarsal pad just behind the metatarsal heads to augment the transverse metatarsal arch. This often helps with conditions like Morton’s neuroma, metatarsalgia and something called Freiberg’s infraction where the 2nd metatarsal phalangeal joint is deformed. 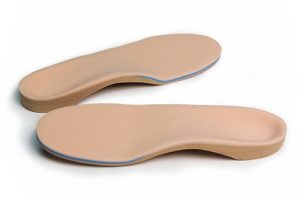 Modern shoes have many orthotic concepts built into them. Motion control shoes have variable densities in the midfoot which help to control pronation of the foot. Stiffness in the shank of the shoe can also limit pronation. A firm heel counter to control th emotion of the calcaneus can also limit foot motion. This limits the rotation that goes up the leg and thereby decreases some of the motion transmitted to knee and hip. 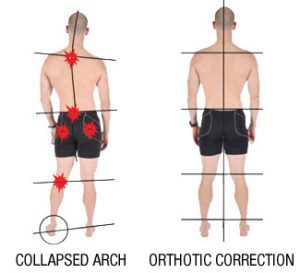